When The Demonologist was announced as a finalist for the International Thriller Writers Award for Best Hardcover Novel I took it as an enormous honor in itself, and never thought I stood any real chance of winning.  Why would I?  My fellow nominees were Lisa Gardner, Lee Child, Douglas Preston & Lincoln Child, Linda Castillo, my fellow Canuck and friend Owen Laukkanen and Stephen King.  With a field like that, I was more than happy to just be a shoulder rubber.

Then, this weekend, I went down to New York for the awards banquet at ThrillerFest.  Hundreds of colleagues, agents, and editors in a Manhattan hotel ballroom – many of whom I’ve read with admiration and who constitute the firmament of the world’s thriller writing.  An audience I found myself addressing when I accepted the award.

It still feels a bit unreal.  I feel so very privileged.  It was a fun night, I tell you.

So thanks to the ITW, the judges, Jenny Milchman for being the one to say my name into the microphone, and for anyone else who may have had a hand in this.  As I said at the awards banquet (and is captured here on video, even if you can’t quite hear me), it was the fifth most exciting night of my life.  The others?  My wedding day.  The births of my two children.  And one night I can’t discuss publicly.

Just saw that The Demonologist is on the shortlist for the Sunburst Award! And this as the sun actually appeared outside the window. Coincidence? Obviously not.

The Sunburst Award acknowledges excellence for Canadian literature of the fantastic.  My thanks to the Sunburst association and the jury, as well as congratulations to my fellow nominees, including the wonderful Nalo Hopkinson and Guy Gavriel Kay.

Shirley Jackson is the sweetest when it comes to sourness, a shining light in the darkness field. Have you read “The Lottery” or The Haunting of Hill House or We Have Always Lived in the Castle? No?  You must. I’m not kidding. Quit your job, file for divorce, barricade yourself inside a storage locker – do whatever you need to do to read her.

As you can see, I’m an admirer.

Shirley Jackson, the late American writer of literary horror, subtle psychological thrillers and weird tales, has a prize named after her.  In honour of her accomplishments, the prizes are given each year to stories, anthologies, novels etc. that mine the Jacksonian vein of horror and suspense.  And this year…The Demonologist is a finalist for Best Novel!

I’m blown away grateful to be on the list with such great writers and books, some of which I’ve already read and the others I’m about to.  Check out all the shortlists here:

I learned today that The Demonologist is a finalist for the 2014 International Thriller Writers Award for Best Novel.  Mondays don’t typically come with such pretty bows tied on them, gotta say.

Returned home from the Dark Side Tour appearances in Calgary, Vancouver and Ottawa (all great fun) to see The Demonologist paperback on the Globe and Mail’s bestseller list for a 9th week (in the #9 spot).

I’m honoured to see today that I’ve been longlisted along with a number of other amazing Canadian authors for the LIBRIS Awards Author of the Year.  And that’s not all!  The Demonologist has been similarly nominated for Fiction Book of the Year.

I’m on CBC Radio’s The Next Chapter with Shelagh Rogers answering the Proust Questionnaire today.  If you missed it, you can hear the podcast at the link below.  (My bit is towards the end, but the whole thing has good stuff!)

The Next Chapter – Proust Questionnaire

The US paperback is here!  (And it will be out everywhere else March 11). 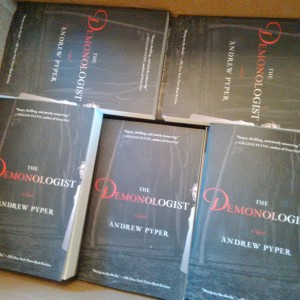 I was going to have a quiet night at home re-watching The Silence of the Lambs.  That all might have to change now…

It has all come to this. The last day to vote The Demonologist for Best Thriller/Mystery of 2013 in the CBC Bookies!

It has been a long and absurd competition, one that, in true Canadian fashion, has a low-stakes but also comically meaningful prize at the finish line…the Golden Beaver! If you would, please go to http://www.cbc.ca/books/the-bookies-2014-vote-for-the-best-books-of-the-past-year.html  and give The Demonologist your vote. It will change the very DNA of Canadian Literature forever. (Well no, not even close, but this message needs a dramatic closer).