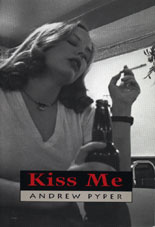 “Kiss Me” she said, the strawberry gum lurking in her molars.

Love, was that it? Was that the feeling that moistened the eyes, sent gentle currents through the discs of the spine? No, not love, just a kiss outside the Stratford Arena in December, the Junior B team playin their Friday night game imside. Fourteen years old and nowhere else to go to stay warm. The smell of Cherry Chap-Stick and father-borrowed splashes of Lectricshave on the collar. Giant snowflakes whispering around us, confetti clinging to eyelashes. No love but definitely something close.”

–Excerpted from Kiss Me

Kiss Me is a collection of thirteen short stories published in Canada by The Porcupine’s Quill, in 1996. almost all of the stories originally appeared in magazines and journals previous to their publication in book form. The first of these was “Call Roxanne”, which appeared in The New Quarterly in 1991, when the author was twenty-two years old.

The stories in Kiss Me deal with the issues, sensibilities and intangible estrangements of contemporary youth. The characters who populate Kiss Me’s world are part of a generation currently facing its own varying set of “firsts”: first nasty drug trip, first moral predicament, first sex, first love. But there are no neat and tidy “coming if age” passages here. Instead, these are narratives of reaching out — and often failing to touch– one another in a time of both privilege and fracture.