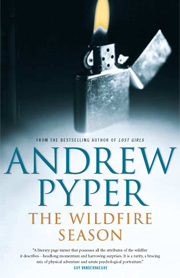 “Pyper is the Great White North’s answer to America’s Michael Connelly.  The big difference between the two?  1)  Connelly has written eight times as many books, and 2) Pyper’s new novel is better than most of them…With “The Wildfire Season,” Pyper takes a lit match to the emo-thriller formula and sends it up in smoke faster than flash paper…Literate, raw…searingly poetic.  He succeeds in tracing the life-span and aftermath of tragedy…plumbing depths not normally explored in your average mystery novel.”
— San Diego Union-Tribune 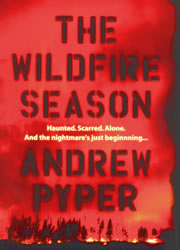 “Excellent pacing and credible characters…Pyper writes beautifully about the splendor and dangers of the wilderness.  He doesn’t anthropomorphize, but his understanding of bears and fire imbues both with a life force.”
— Publisher’s Weekly

“Andrew Pyper has talent galore and sure hands, ratcheting up the suspense to the very end.”
— Stewart O’Nan, author of The Good Wife

“Andrew Pyper’s rich new novel posseses all the attributes of the wildfire it describes — headlong momentum and harrowing surprises. It is a rarity, a literary page turner, a bracing mix of physical adventure and astute psychological portraiture.”
— Guy Vanderhaeghe, author of The Last Crossing and The Englishman’s Boy

“This novel’s on fire…Andrew Pyper knows how to whirl a complex plot into motion…but exceeds the demands of the suspense-thriller genre.”
— The Globe and Mail

“A brilliant melding of mystery, suspense, survival…It’s an irresistable force…A balance between narrative urgency and literary quality is hard to strike, but Pyper makes it look easy.  It’s powerful, absorbing reading from one of Canada’s finest young writers.”
— The Vancouver Sun

“Pyper proves to be a wickedly funny and astute observer of the human condition…The Wildfire Season is moving and utterly convincing.”
— Edmonton Journal

“Lost Girls was one of the most stunning debuts I’ve read: literate, scary, haunting. Now, with The Wildfire Season, Andrew Pyper has solidified that marvellous potential. A novel of true haunting loneliness and isolation, plus a gripping story that scorches off the page.

This novel of extraordinary power combines the supernatural, edge of your seat suspense, nature in all its wondrous ferocity, and scars–visible and invisible. The writing is a dream, demonstrating that indeed, the past can kill. This is a novel that blazes with all the ingriedients of the best literature.”
— Ken Bruen, author of The Guards and The Magdalen Martyrs

Ross River, a.k.a. “Lost Liver”, is a town on the edge, clinging to the outside world at the end of the Yukons loneliest road. It’s the perfect hiding place for Miles McEwan, the town’s hard-drinking, fist-fighting fire chief. No one gets close to Miles, except the blackened spectre of a young man only he can see, a haunting reminder of the forest fire that scarred Miles’s face and psyche.

But the slow burn of Miles’s exile is about to explode into life – and death – over the course of a handful of days at the height of the wildfire season. A hunting party seeking one of the last giant grizzlies is about to encounter a savagery of a different sort. In the mountains, a flame ignited by human hands begins to smoulder. And amidst the primeval beauty of rock and forest, someone is contemplating murder.As the hunting expedition confronts a chilling new enemy, and the growing inferno races to the edge of town, Miles embarks on a desperate rescue not only for the life of his five-year-old daughter but also for his own salvation.

The Wildfire Season is a dark psychological thriller, a visceral adventure and an unusual, and unusually moving, love story. It is also a lyrical exploration of our most raw emotional truths, of what ultimately binds us to family, to conscience, to what remains of the natural world.