A spellbinding literary horror story in which a Columbia professor must use his knowledge of demonic mythology to rescue his daughter from the Underworld. 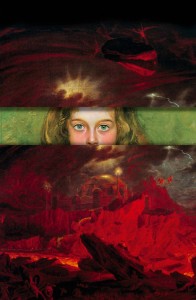 Professor David Ullman’s expertise in the literature of the demonic—notably Milton’s Paradise Lost—has won him wide acclaim. But David is not a believer.

One afternoon he receives a visitor at his campus office, a strikingly thin woman who offers him an invitation: travel to Venice, Italy, witness a “phenomenon,” and offer his professional opinion, in return for an extravagant sum of money. Needing a fresh start, David accepts and heads to Italy with his beloved twelve year-old daughter Tess.

What happens in Venice will send David on an unimaginable journey from skeptic to true believer, as he opens himself up to the possibility that demons really do exist. In a terrifying quest guided by symbols and riddles from the pages of Paradise Lost, David attempts to rescue his daughter from the Unnamed—a demonic entity that has chosen him as its messenger.

Published by Simon & Schuster in Canada and the US, and by Orion in the UK.

* Finalist for the 2013 Shirley Jackson Award

* Finalist for the 2014 Sunburst Award

“A smart, thrilling, utterly unnerving novel.  Pyper’s gift is that he deeply respects his readers, yet still insists on reducing them to quivering children.  I like that in a writer.”  — Gillian Flynn, #1 New York Times bestselling author of Gone Girl

“It’s impossible to ignore the devils and demons who have a tangible presence in this story, but the novel’s deeper pleasure comes from the analysis Ullman applies to these horrors…Bring on the devils.”—The New York Times Book Review

“A thrilling exploration of how we all have to do battle with our own demons.” — Mail on Sunday (UK), Thriller of the Week

“As compelling and smoothly chilling a tale as you’ll find this year. The Demonologist shows an enormously gifted writer at the top of his game, producing a novel of eerie menace and unique depth. Those of us who write supernatural stories do not throw the names Ira Levin, William Peter Blatty, and Peter Straub around lightly. You’ll be hearing all three associated with Mr. Pyper soon, and all such comparisons are warranted, the highest praise I can offer.” – Michael Koryta, New York Times Bestselling author of The Prophet

“This book is going to be big, and it’s going to be popular, and it absolutely deserves to be both of these things. You should buy it, and read it, and let it scare you stupid…I’ll say this: I’ve read books dubbed ‘literary’ — full stop — that didn’t contain sentences as well-crafted as the ones in The Demonologist. Pyper’s take on the horror genre is interesting because it is innovative…I dare you to read it. The Demonologist might just scare the lit out of you.” — National Post

“A stunningly crafted, intelligent and moving horror story… There is an elegance to the storytelling and a command of what evil may mean, that lingers with you long after the end.” — Daily Mail (UK)

“Smart and astonishing, Andrew Pyper has created a recurring nightmare for adults.  The Demonologist holds a mirror to the reader and reveals the places where our deepest darkness lurks.  Like Milton’s Paradise Lost, this is the story of the human condition, the fall, and the way back.  I slept with the light on for nights, too obsessed to stop reading and too terrified to dream.”  — Brunonia Barry, New York Times and international Best Selling author of The Lace Reader and The Map of True Places

“Plenty of books claim to be scary, but this is genuinely terrifying, don’t-read-late-at-night stuff. Thrilling, compelling, and beautifully written, The Demonologistmakes Rosemary’s Babyfeel like a walk in the park.”
—S.J. Watson, New York Times bestselling author of Before I Go to Sleep

“Richly crafted, deliriously scary and compulsively page-turning from beginning to end.  Imagine The Exorcist and The Da Vinci Code as penned by Daphne du Maurier.  Don’t miss this one!” – Jeffery Deaver

“Pyper is an intelligent writer, steeped in Miltonian symbolism, gifted with language . . . This artful literary exploration of evil’s manifestation makes for a sophisticated horror tale.”— Kirkus

“Pyper’s novel is enthralling in its subdued intensity…Calm and learned prose that chills to the bone.” – Montreal Gazette

“In the sly, creepy and often-horrific The Demonologist, Andrew Pyper knows how to get under the skin of even the most rational reader.”
— The Columbus Dispatch

“A chilling novel for readers who like their horror presented with literary flair.”—Fort Worth Star-Telegram

“This is storytelling that transcends the boundaries of genre…beautifully written, with layer upon layer of fear, redemption and deep feelings rarely expressed in a fiction.  The Demonologist should not be missed.”  – Hamilton Spectator

“The plot rarely flags and remains difficult to predict, twisting elegantly rather than through clear contrivances, and the Miltonic and biblical echoes add an extra layer to what is, at its heart, a dissection of depression and an argument for hope.” – Winnipeg Free Press

“The Demonologist is that rare thing – a novel that is both genuinely terrifying and erudite.  The research is excellent and lightly worn, the pace and cleverness of the plot thrilling.  One of the most exciting works of fiction I’ve read for some time.”  — Kate Mosse, author of Labyrinth, Sepulchre and Citadel

“The evil of Milton’s pandemonium comes to life . . . Pyper’s novel takes on “things that go bump in the brain” and delivers a stirring entry in the supernatural thriller genre.” – Booklist

“Part horror, part thriller, all page-turner . . . The Demonologist has all the twisting excitement of a Dan Brown novel, and all the lurid, gory violence of a Stieg Larsson.”–The Globe & Mail (Canada)

“A complex novel about loss, anger, faith, grief, love and forgiveness…[The Demonologist] will frighten you out of your shoes.” — Toronto Star

“* * * * (Four Stars).  Pyper’s a star because he writes so spectacularly. The entire story is drenched in dread, and his most terrifying scenes are so vivid, you’d best not be reading the book just before hitting the sack.” — NOW

“Andrew Pyper’s satisfying prose propels a narrative sure to please readers with or without a dog-eared copy of Milton’s Paradise Lost on their shelves. If you’re looking for smart horror that chills without resorting to Grand Guignol, give The Demonologist a try.” – Christopher Buehlman, author of Those Across the River

“Andrew Pyper is a rare breed.  Reading The Demonologist is like running through a house on fire – you’ve got to get through; nothing will stop you.  And when you’re out, brokenhearted and bewildered, you’re left wondering if what happened was real.  That’s Pyper’s brilliance: he does it so well you never see the fiction.  Contemporary and masterful, this is grown up horror for grown up people.”  – Sarah Langan, three-time Bram Stoker Award-winning author of Audrey’s Door