A New York Times Crime Novel of the Year 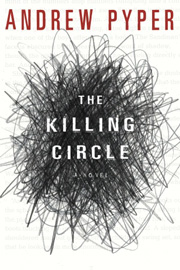 “If Andrew Pyper scripted our collective nightmares, we’d all be dreaming and screaming like the narrator of his gorgeously written and thoroughly unnerving suspense thriller, THE KILLING CIRCLE… Taken as either a classy ghost story or the chronicle of one man’s mental breakdown, this is a terrific yarn. But in examining the universal need to define one’s self through narrative, it also explores the darker side of storytelling.”
— The New York Times Book Review

“Extraordinary…Powered by an ingeniously nonlinear narrative and suffused with a tone thick with dread, this is easily Pyper’s most ambitious – and absorbing – work to date.”
— Publishers Weekly (Starred Review) 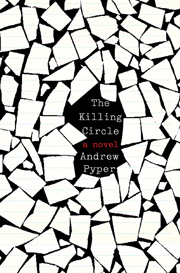 “One of the top two or three mysteries of the year.”
— The Cleveland Plain Dealer

“Few are better at conveying an omnipresent sense of dread and horror bubbling just beneath life’s seemingly mundane routines.  THE KILLING CIRCLE will keep you up one night reading and another four checking the locks on the doors.”
— Booklist

“THE KILLING CIRCLE is one great read: darkly lyrical and atmospheric, it’s as haunting as it is gripping. Highly recommended.”
— Harlan Coben 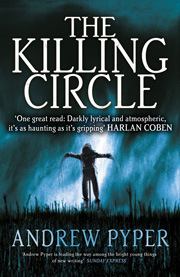 “Andrew Pyper delivers his most inventive tale yet with the compulsively readable The Killing Circle…Sophisticated, witty, and  flat-out terrifying.”
— amazon.ca Editors, Best Books of the Month

“A terrific tale…The Killing Circle is one book that is head and shoulders above most thrillers out there now.”
— Richmond Times-Dispatch

“The story’s great strength lies in its exquisite pacing, and the almost continuous suspense and claustrophobic atmospherics.  Pyper is on his way to becoming the greatest crime writer out there.”
— Trouw (Netherlands)

“Very smart, very scary, very good:  once I started I couldn’t stop.  Fans of dark and witty suspense will love The Killing Circle.”
— Peter Abrahams, author of Oblivion and End of Story

“Pyper is a true prose-master…caustic humour and sharp-witted  observations.  An uncozy, fright-filled thriller.”
— The Globe and Mail (Editor’s Recommendation)

“The Killing Circle is a brilliant thriller, a cleverly constructed story-within-a-story that will hold you to its last handful of  words.  Moreover, it’s suberbly written…Not since Richard Ford’s  vague, dreamy Frank Bascombe has middle-aged man been so laid  bare…The Killing Circle is thrilling to its last gasp and breath,  and I dare you to read it just once.”
— The Hamilton Spectator, Gary Curtis

“The Killing Circle keeps readers guessing…literary and intelligent, but about as edgy and darkly atmospheric as fiction gets.  Never dulls for a second…Terrific.”
— The Gulf News

“Andrew Pyper is more than adept at delivering atmosphere while balancing different story strands and The Killing Circle finds him raising his game even further.”
— Dublin Evening Herald

“The villian leaps off the page…Pyper does an impressive job building suspense, offering enough narrative twists and turns to keep  the reader nicely off balance. Basing the experience of the novel in  Rush’s first-person perspective, he is able to capture not only the  depths of the haunting and gradually mounting terror, but also the more routine aspects of the character’s life…A strong and  compelling read.”
— The Vancouver Sun

“The Killing Circle is the best of a quartet of outstanding mystery-thriller novels by Andrew Pyper.  A riveting prologue, impossible to put down, quickens the beat and leaves you with a twist in the pit of your gut.  The twist weaves you through the story of fear, panic and resignation and it drives you onward, page by page…It’s a challenging and compulsive read that clearly demonstrates Andrew Pyper as a unique storyteller on the Canadian scene.”
— Hamilton Spectator

“Rising star [Pyper] doesn’t disappint in [this] fast-paced, funny thriller.  A terrific ride of a mystery…the story hurtles along.  Pyper is so good at dropping clues.  The thing is, he’s also good at introducing so many twists that you’d swear his plot was inpired by a bowl of rotini.”
— Edmonton Journal

“Spookily terrific…Great suspense and a great story.  And also  gives pause to reflect on the nature of evil.”
— Winnipeg Free Press

“The Killing Circle is transfixing in its handling of suspense, and thought provoking in its reflections on the seductive art of manufacturing fortune. Pyper delivers a dark, compelling read that occasionally–and refreshingly–steps outside itself and invites readers to think about the nature of fear and obsession.”
–The Walrus

“There’s an urgency and drive to the story, which makes it an unsettling book to read late at night.”
— VUE Weekly

“This new novel – perhaps Pyper’s best – could sit comfortably between noted thrillers by Patrica Highsmith and Ruth Rendell. Or it could share space on a CanLit shelf with, say, Timothy Findley’s Headhunter and Margaret Atwood’s The Robber Bride…That rare hybrid, the literary page-turner.”
— UofT News

“While the plot is intricate and clever, this novel is all about tone  and atmosphere…a compellingly creepy story.”
— Portsmouth (N.H.) Sunday Seacoast

From acclaimed, bestselling author Andrew Pyper, a suspenseful page-turner that explores the repercussions of that most dishonest of thefts: stealing another’s story and calling it your own.

Patrick Rush, a former bright light at the National Star now demoted to the reality TV beat, is still recovering from his wife’s death when he joins a writers’ group in Toronto. His goal: to write the book he’s always felt lived within him. Trouble is, Patrick has no story to tell. And while the circle’s members show similarly little literary promise, there is one exception. Angela. Her unsettling readings tell of a shadowy childhood tragedy and an unremitting fear of the Sandman, a “terrible man who does terrible things.” It’s the stuff of nightmares or horror films. Or is it?

Over the weeks that follow, a string of unsolved murders seem increasingly connected to Patrick. And then the circle’s members start to go missing, one by one. Still haunted by loss – and by a crime only those in the circle could know of – Patrick finds himself in a fictional world made horrifically real. But nothing will put him in greater danger than that ancient curse of natural born readers: the need to know how the story ends.

At once a complex and compulsive read, The Killing Circle explores the side effects of an increasingly fame-mad culture, where even the staid realm of literature can fall prey to ravenous ambition and competition.